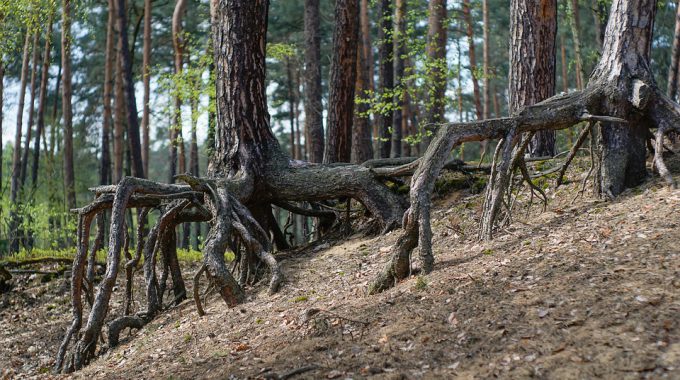 A FRACTAL is never ending pattern. They are created by repeating a simple process over and over in an ongoing feedback loop. A tree is such a Fractal. Not only the branches of a tree have the same pattern when getting smaller, but also the entire system underneath the earth is interconnected.

It has now been proven by the University in Auckland in New Zealand. A tree stump that should have been dead is kept alive by neighbouring trees that provide it with water and nutrients through an interconnected root system.

Some students were walking on a forest path west of Auckland when they suddenly saw a tree stump on which new, living tissue grew. Curious about how the stump survived without green foliage, they decided to put a number of water monitors in the stump. They did the same with two nearby mature trees of the same species, called kauri or Agathis australis.
In the weeks that followed, the researchers discovered a connection between the water flow in the trees and the stump. During the day, when the neighbouring trees evaporated water through their leaves, the water in the tree stump almost stopped. In the evening, when the trees were inactive, the water began to flow into the stump. Even when it was cloudy or rainy, which reduced the flow of water in the trees, the flow in the stump increased.
In healthy trees, the water flow is largely driven by evaporation. For the stump, which has no leaves, that is not an option. In this case the water flow turned out to be tied to the behaviour of its neighbours…

Maybe also interesting for you

Zero point field – where the other dimension begins

Are people who are in coma and have been declared brain death really dead?